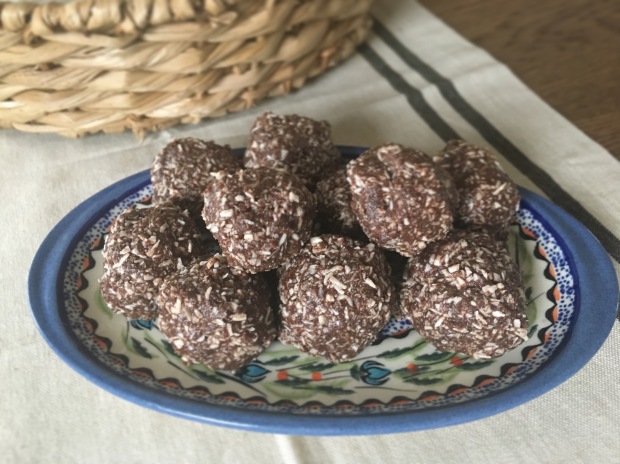 I have discovered that most of my recipes lately have turned into happy accidents, and that’s ok with me. It’s a lot better than a few years ago where I had mainly very, very unhappy and messy and burned and gross accidents. This recipe came about because my laziness trumps everything. Unfortunately, I’m lazy, and I want instant gratification #millenial.

Earlier this week a friend of mine emailed me a recipe for AIP-friendly Samoas. I was instantly excited because I’ve greatly missed sweets. I looked at the recipe and realized that it was going to take some time, and after eating dinner last night I was really short on time and wanted a dessert sooner rather than later. Luckily, the ingredients I needed had just arrived that day from Thrive Market so it was even more of an incentive to make the recipe, but like I said, I’m lazy and generally in a hurry.

Hence, the excited Google searching for “quick carob powder desserts”. I’ve yet to Google what carob actually is (so don’t ask me yet), but it’s a substitute for cocoa or cacao, not entirely unlike chocolate, and that’s all I care about. Both cocoa and cacao are not AIP-friendly because they come from beans, and beans can have inflammatory properties depending on how your body processes those beans. #byebyecoffee

I found this recipe for 5-minute (it took me 10 minutes) no-bake cookie balls, but I didn’t have squash flour. I mean, who does? Do I just dehydrate squash and grind it into a powder? It’s not flour. It’s powder. Just call it squash powder, or coconut powder, or yucca root powder aka Cassava Flour. I think the word “flour” is in there, just so people know they can use it in place of regular flour. It’s like how once this health movement got going, people coined the term “bone broth” instead of using the more traditionally known “(insert animal bone of choice) stock”. Without getting into specifics, they are the same thing.

I also didn’t have flaked coconut, I had unsweetened shredded coconut. I made some substitutions and, honestly, I couldn’t be happier!

Here is the recipe, and I’ll follow it with some helpful tips discovered by my own trial and error:

First, these no-bake cookie balls taste amazing with the warm coconut oil. The problem is that they don’t really stick together until the coconut oil cools off. I could have eaten the entire bowl of batter right then and there, but I wanted to leave something to be enjoyed for another day.

Initially I had used 3 tablespoons of honey, but (as mentioned above) the balls just weren’t sticking together, so I added an additional tablespoon with some apprehension. They stuck together better, but it also made them sweeter. They are sweet, but not too sweet. One cookie ball is definitely enough to give your sweet tooth a fix, especially if you’re missing out on the Girl Scout season because of your dietary needs.

The reason that I said to let them warm at room temperature is because this morning I damn near broke a tooth biting into one of these cookie balls. Just wait a few minutes and let them warm up. I don’t think that my fridge is too cold, but they were surprisingly hard considering how soft and crumbly they were before the oil cooled. Admittedly, a half a cup of coconut oil is a lot of coconut oil. It doesn’t sound like a lot until you start scooping it into a measuring cup and realize you’re going to have to buy another giant jar of cold-pressed organic coconut oil.

Feel free to use any brand that you prefer. Most can be purchased at your local grocery store, natural grocer, Thrive Market, or Amazon. Here are the products that I used by brand:

Himalayan Pink Salt from the bulk dry goods of Sprout’s

Regarding the cinnamon and the honey, I’m slowly but surely using products from my pantry before buying organic or “healthier” options. The penny-pincher in me just can’t stand the idea of throwing away ingredients until the container is empty. And in the grand scheme of things, not having organic cinnamon or the exact healthiest honey isn’t going to hurt me, that I’m aware of. I did, however, recently purchase raw unfiltered honey from Sprout’s, but the consistency did not seem suited to this recipe. It’s much too thick, and sort of gritty.

Also, a note about the salt: Seriously, check out the bulk dry goods at any natural grocer. I bought 1 POUND of Himalayan Pink Salt for $2.24. I plan to see if they have shredded coconut and coconut flour the next time I go, just to see how much cheaper it would be. 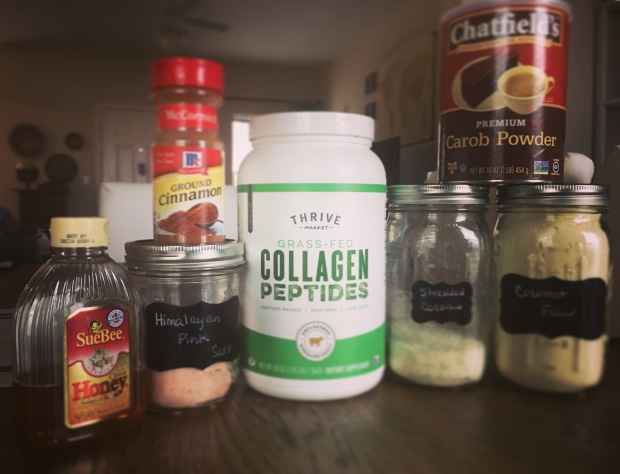 Delivery Fails I'm improvising It's too close to call. Leftover Mania Sometimes you win and sometimes you fail Uncategorized Wins

Do You Remember Your First Calendar?

The Holiday Season Was Busy, and Before I Knew It, We Were on the 472nd Day of Winter.