For a while now I’ve been trying to be a plant-based vegan.  I have my ups and downs, but generally being meat free has made me feel better.  Surprisingly, I usually lose 5 pounds every time I hop back on the vegan train.  I’ll have a moment of weakness (Thanks, Chick-Fil-A), and then kind of spiral downward for a week or two and gain those 5 pounds back.  Not that I’m eating Chick-Fil-A every day, but I’ll start wanting to eat chicken or beef again and plan my meals accordingly around meat.

Anyway, one of the plant-based vegan recipes was for enchiladas.  Hands down, my favorite Mexican food.  It’s legit the only thing I’ll order at Mexican restaurants.  I base how good a Mexican restaurant is two things alone: 1) How amazing are the chips and salsa? 2) How amazing is their chicken enchilada, with red sauce, rice and beans?  Only those two criteria.  Always.  I don’t care about atmosphere or margaritas.  Just their chips and salsa, and their enchiladas.

Back to the recipe.  I had such high, high hopes for this one.  I really did.  I’ve never made enchiladas, but I’ve spoken to my aunt and uncle many times about how to make them.  They lived in Texas for a long time, and my mother-in-law is from Mexico so I’ve had ample resources at my fingertips.

One thing that I did that was not in the recipe was dip the tortillas into the enchilada sauce to coat them.  This was told to me by my aunt, who said she more or less has an assembly line when she makes enchiladas.  I thought, “Oh yeah, I’m so fancy.  Look at my assembly line.  I’m gonna dip the heck out of these tortillas”.  So I did.  The recipe did call for warming up the tortillas so I thought why not warm them up in the sauce?

I dredge them in the sauce, I fill them, I close them, I rotate them.  Things start falling apart when it was time to close them, but I pushed through and thought that when I rotate them, I can just use the next enchilada to hold the previous one together.  You know, kinda butt them up against each other.  It worked, sort of…. until I ran out of tortillas and had ample stuffing still available.  And ample sauce.  So what did I do?  The only logical thing: I’ll just dump it all on top.  (smack hand on forehead) Little did I know, that was a terrible idea. 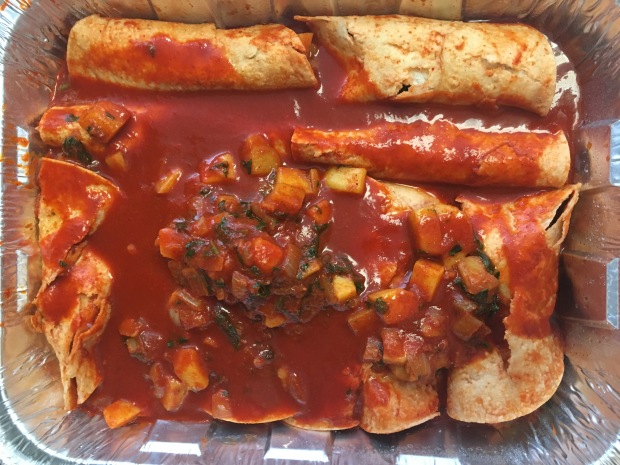 The above picture is prior to cooking, and prior to adding cheese (yummy!).  Once cooked, it only went downhill from there.  The sauce soaked into the already fragile tortillas, leaving a wet, mushy mess.  But it tasted great!

And let’s just take a minute to admire those potatoes.  Those potatoes nearly cost me my limbs.  Honesty time:  I’ve never made potatoes.  At least not in the sense that I’ve peeled them, cut them, cooked them, and eaten them.  I’ve done some form or part of that process, but never entirely on my own.  So that means I had to learn how to do the entire process by myself.  First I had to Google how to cook potatoes.  Apparently, it’s best to peel them first.  Now, I don’t know if that means that you can cook them with the skin on or if you shouldn’t cook them with the skin on, but either way Google told me to peel the potatoes so I peeled the potatoes.  And damn near lost a finger.  I was using a peeler, as you do, and skin off I swear at least two layers of skin off my knuckles.  I mean, how does that even happen?  I know that I’ve used the same exact peeler to peel apples, but these darn potatoes were small, and bumpy, and not at all like an apple.

Anyway, I’d like to try to make this recipe again, only I’ll try to think smarter, not harder.

Lesson learned:  I don’t have to go to a Mexican restaurant to get enchiladas anymore.

Positive lesson learned:  But if I want them to be sans blood, sweat, tears, and skin, I should probably go to a Mexican restaurant to get enchiladas.

One thought on “Enchilada Casserole, Not Entirely Unlike Shrimp Soup.”

Delivery Fails I'm improvising It's too close to call. Leftover Mania Sometimes you win and sometimes you fail Uncategorized Wins

Do You Remember Your First Calendar?

The Holiday Season Was Busy, and Before I Knew It, We Were on the 472nd Day of Winter.